Before Bitcoin was a movement, it was a digital currency. Part of the reason we pour our passion into Bitcoin is because it enables a new way for us to interact with the world around us. While the store-of-value aspect of Bitcoin gets highlighted often, the permissionless payments side often doesn’t receive the attention it deserves. In 2012, Jon Holmquist embraced the Black Friday holiday in order to help Bitcoiners showcase the advantages of their favorite technology, launching BitcoinBlackFriday.com and hacking a mainstream cultural moment into a tool for Bitcoin adoption. Bitcoin Black Friday 2021 is the 9th year of the event, and this year we are doing things a little differently: all proceeds raised on Bitcoin Black Friday will be donated to the Built With Bitcoin Foundation.

In years past, thousands of merchants have participated in Bitcoin Black Friday, offering special discounts for those willing to pay in BTC. But the celebration fizzled in 2017 when Bitcoin’s use as a payments tool became conflated with the larger community debate over block sizes and on-chain transaction speeds. Since then, there have been major scaling and payments advancements, like the evolution of the Lightning Network and the emergence of new payment card and processing solutions.

Given that progress, we at Bitcoin Magazine have decided that it’s time to recast the narrative around Bitcoin payments and remind the world that Bitcoin is an incredible tool for commerce and the inevitable currency of choice for the internet. By bringing Bitcoin Black Friday back, we encourage consumers and retailers to transact in BTC and build upon the bitcoin circular economy, taking an important step toward hyperbitcoinization and helping to create the free and open value system that we all deserve. It’s also a great opportunity to interact with some of the new open-source tools and features that have arrived for Bitcoin as well as the many companies that are building the foundation of the Bitcoin economy.

This year we are partnering with Built With Bitcoin Foundation, and all proceeds will go towards the Foundations efforts to building schools in El Salvador. Built With Bitcoin Foundation has provided Bitcoin education, schools, and water wells to communities in Rwanda, Kenya, Nigeria, India and El Salvador. We believe building communities and educational centers in developing nations is one of the most important humanitarian efforts of today. Showing the citizens of these countries the power of bitcoin moves us closer to hyperbitcoinization while empowering a new generation of thinkers with sound money and education.

You can participate in Bitcoin Black Friday 2021 by:

~For those that wish to HODL their bitcoin, we added credit card payment options for a few of our products.~ 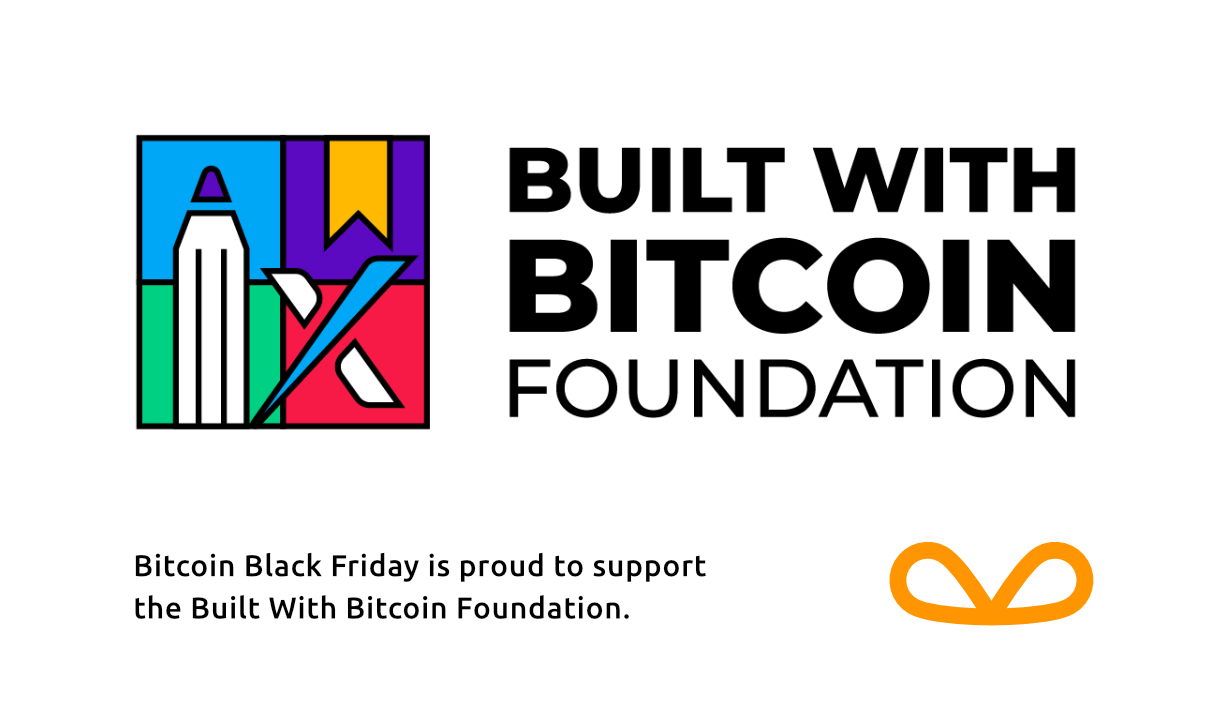 This year, BBF is supporting the Built With Bitcoin Foundation in their mission to use Bitcoin to provide clean water, access to quality education, sustainable farming, and humanitarian support to developing countries. Learn more.